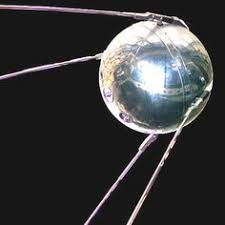 Sputnik  launched 60 years ago
October 4, 2017, marks the 60th anniversary of the launch of Sputnik, the first artificial satellite. It operated for only 92 days and did not carry any specific scientific equipment, but its transmitter generated radio signals heard around the world and that marked the beginning of the Space Age.
Officially, Sputnik was launched to correspond with the International Geophysical Year, a solar period that the International Council of Scientific Unions declared would be ideal for the launching of artificial satellites to study Earth and the solar system.
Sputnik’s official designation was “PS-1” or “Elementary Satellite 1” in Russian.  Traveling at 18,000 miles an hour, its elliptical orbit had an apogee (farthest point from Earth) of 584 miles and a perigee (nearest point) of 143 miles. Visible with binoculars before sunrise or after sunset, Sputnik transmitted radio signals back to Earth strong enough to be picked up by amateur radio operators.
Sputnik was in the form of a sphere, 23 inches (58 centimeters) in diameter, pressurized with nitrogen, it weighed 184.3-pound (83.6 kg). The craft’s primary function was to place a radio transmitter into orbit around the Earth as it circled Earth once every hour and 36 minutes.  Four radio antennas trailed behind. Two radio transmitters within the sphere broadcast a distinctive 'beep-beep' sound that was picked up all over the world. Silver-zinc batteries powered the transmitter for 22 days before giving out.
After about three months, in January 1958, Sputnik’s orbit deteriorated, as expected, and the spacecraft burned up in the atmosphere.
.Despite its simplicity, Sputnik 1 also served science. The USSR built a network of observational stations throughout the country to track its path. Based on those observations, researchers obtained new information on the atmospheric density at Sputnik’s altitudes, and a new branch of science was conceived—space geodesy.
Special call sign R60SAT will be active from 00-00UTC October the 1st 2017 till 23-59 UTC October the 8th 2017. This activity is to commemorate the 60th anniversary of the launch of the world’s first artificial satellite orbiting Earth.

2017 JOTA-JOTI Theme — 60 Years Connecting Scouts
The theme “60 Years Connecting Scouts” recognizes the start of the event in 1957, commemorating growth in expanding communication channels activated on the third weekend in October, 20 to 22 October 2017.
Those channels include communication via radio, Internet, social media, ScoutLink and IRC chat services, Skype, and more. It also recognizes the goal of the event – connecting Scouts  This allows them to discover geographic and cultural differences and similarities. Plus, they are exposed to the technology that makes all this happen.
​ 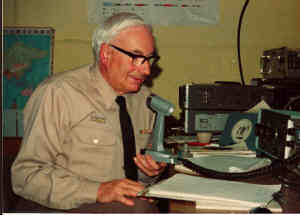 Founder of JOTA ( Jamboree on the Air)     Les Mitchell - G3BHK (1923- 2014) died on October 6, 2014.
The young Les Mitchell was a sea-scout and later joined the Royal Navy, where he was trained in radio. He spent a year in the U.S.A. and another in Australia, becoming a Scout Leader in both countries. When he became a radio amateur, with his own call sign G3BHK, what struck him was the similarity between Scouts and Radio Amateurs in the friendly way they transcend class, creed, colour, religion and political boundaries.
In 1957, a World Scout Jamboree was held at Sutton Park, England, with 35,000 Scouts from 62 countries attending. For the first time at any World Jamboree local radio amateurs installed and operated a large station under the call sign GB3SP (Sutton Park). Scouts and leaders were allowed to visit, as long as they stayed behind the little fence with the flower pots and kept the noise down.
Les Mitchel, G3BHK, (9 December 1923 – 6 October 2014), a British Scout leader at the time, wrote:
“I was very surprised by the number of overseas Scout radio amateurs attending the Jamboree and decided that some effort should be made to bring them all together. A notice in the Jamboree Newspaper resulted in daily coffee meetings during which we got to know each other and had a good rag chew. Towards the end of the Jamboree we were all a little sad at our impending departure, and someone casually remarked that we might try to contact each other on the air. This then developed into the idea of trying to make contact on one specific day in order to concentrate our efforts, and I was asked to make the necessary arrangements”. Unknowingly, Les became the JOTA founding father. (This was his own choice of title for Les felt it described exactly what the event was – a Jamboree-on-the-Air.)
In October 1957, Les organized a weekend station with his local Scout group to test the idea. They made contacts all over the world and it was obvious that the interest was such that a worldwide Radio Jamboree could be envisaged
There have been changes which have improved the event. One is the change from Amplitude Modulation (AM) to Single Side Band (SSB). The second improvement, the miniaturisation of equipment. In 1958 a single station consisted of several large sized and heavy pieces of equipment; today one can carry a complete station in a small suitcase and assemble it within a few minutes. It is only the aerial which still needs the same amount of installation time as it did in the past!
With the advent of the Internet, and following the same concept that JOTA had used for decades, amateur radio is still making long-distances contacts. In 2013, the World Scout Committee decided to join JOTA and JOTI together into one big event.
First held in conjunction with the fiftieth anniversary of Scouting in 1957, it is now considered the largest annual event scheduled by the WOSM (.World Organization of the Scout Movement )
Les Mitchell, G3BHK (Silent Key) - Founder JOTA, was Inducted into CQ Hall of Fame 2016

BACAR- Balloon Carrying Amateur Radio
Launch of BACAR 5 will be at Trichardt Model Airplane grounds, near Secunda, 21 October 2017.
BACAR5 has received clearance from CAMU to launch on 21 Oct 2017
We will start filling the balloon at 06:00Z. Launch site will be at the Trichardt model airfield
Frequencies will be confirmed closer to the launch. Chase teams are always welcome.
The launch moved to 21 October to give the YOTA and CQ Hou Koers youth a chance to experience the parrot repeater on the BACAR5 payload
Christo ZR6LJK  SARL Forum Event: The BACAR5 launch on 21 Oct 17  ZR6LJK Posted - 17/09/2017
​
ARHAB (Amateur Radio High Altitude Balloon)
aka   BACAR (Balloon Carrying Amateur Radio)    aka   HABEX   (High Altitude Balloon Experiment Launch)
High-altitude balloons are unmanned balloons, usually filled with helium or hydrogen, released into the stratosphere, reaching between 60,000 to 120,000 feet (18 to 37 km). Launched into what is termed "near space" the area of Earth's atmosphere where there is very little air, but where the remaining amount generates too much drag for satellites to remain in orbit.
ARHAB often flown by students and by amateur groups for both scientific and educational purposes, do not require many resources for conducting a launch. A  flight consists of a balloon, a recovery parachute, and a payload.
Most flights use an Automatic Packet Reporting System (APRS) tracker which gets its position from a Global Positioning System (GPS) receiver and converts it to a digital radio transmission. Other flights may use an analog beacon and are tracked using radio direction finding techniques. Long duration flights frequently use high frequency, custom built transmitters and slow data protocols, to transmit data over great distances using little battery power. Other payload components may include sensors, data loggers, cameras, amateur television (ATV) etc.
Common uses include weather, atmospheric and climate research. They are also widely used to collect data and imagery from near space and  submillimetre astronomy. Testing radio range is often a large component to these hobbies
Use of amateur radio transmitters on an ARHAB flight requires an amateur radio license, but non-amateur radio transmitters are possible to use without a license.

Ladies on the Air net: A Dream Come True
Barb Schlueter, KDØWAU from Andover, Kansas,(USA) gave a presentation to the Quarter Century Wireless Association in Wichita, Kansas on December 20, 2016.  She spoke about starting the “Ladies On The Air Net.”
Via Echolink in July 2013, Barb heard “The Breakfast Club”, hosted by Don McLain, KB8RAD, of the Central Michigan Amateur Radio Club. Barb expressed an interest to Don about a ladies net in Wichita. Don introduced Barb to his wife, Julie, KB8ZXR, who was running a “Lady's Tea Time Net” in the evenings, on Echolink.
Barb was a member of the Wichiata Amateur Radio Club (WARC). In December 2015, she was elected treasurer and assumed Net Control every couple of weeks. During the February 2016 Installation of Officers Dinner she expressed a desire to have a lady's net where only lady hams could talk. Barb exchanged emails with Julie to learn more. She logged into Julie’s net to get operating experience. Julie said the gentlemen’s segment was important to keep conversation flowing. Barb contacted Glenn Holbrook, W5GEH, for guidance on an unscripted net. Glenn runs an Antenna Net and told Barb a golden rule. “Barb, just because YOU think something is interesting doesn’t mean everybody else does!”
In June and July, Barb searched for some ladies who were willing to talk on the air. She had sign-up sheets at Wichita Amateur Radio Club Field Day and placed fliers at the local Derby Radio Shack where Hams frequent. Also, in July, the Kan-Okla Intertie System posted to its Facebook page the following comment: “It has come to the board’s attention that the ladies would like to start ladies net on Tuesday nights. The board members of the Kan-Okla would like to offer the system on Tuesday nights to the ladies. Just want everyone to know just in case they decide to use the system.”
On July 19, 2016, the ladies had their first net.. Presently, 19 ladies are participating. Typically, nine to 11 ladies participate in the net. The objective is to be able to communicate, make friends, share interests and remember Glenn’s golden rule!
It is sad to note that Barb’s mentor, Julie McLain, KB8ZXR, became a silent key in May. Julie was a true joy to hear on the Ladies Tea Time Net in Michigan.            http://www.arrlmidwest.org/pdfs/ar;,wd=may2017news.pd
ARRL Midwest Div. Newsletter, May 2017 Wayne Schlueter KD0WAT – Editor Grounded Grid, Wichita Kansas

Ladies On The Air  www.facebook.com/LadiesOnTheAir/
The purpose of Ladies On The Air is to encourage Lady Ham Radio Operators to have fun getting out on the air each week talking to other Lady Hams. Tuesdays 8 PM Central KanOkla Intertie System Echolink Node: W0UUS-R
Email Callsign to KD0WAU@cox.net to obtain access through Echolink
Barb Schlueter,- KD0WAU BIO    https://www.qrz.com/lookup
I passed my General in October of 2013 and my Extra in April 2017 In my house there is always a new radio to learn!   I am well versed in computers so naturally I want to manage the radio through software. I have a Yaesu 817, 897, 857, 920 and a Kenwood TM-V71. I interface them to Ham Radio Delux and Signalink working with PSK31 using fldigi. I use a vertical antenna called a Grasshopper, an Alpha Delta DX-CC Dipole for HF and a GP6 for UHF/VHF up about 20 feet. I started a local Ladies Net on a 70 Centimeter UHF repeater and it is now tied to the KanOkla Intertie System.
Contacts:   Facebook ‘HAM YL’ ;
yl.beam newsletters  zs6ye.yl@gmail.com
Archive copies of yl.beam available @ :
WEST RAND ARC       wrarc-anode.blogspot.com https://wrarc-anode.blogspot.co.za/
& Italian Radio Amateurs Union: QTC U.R.I. –  La rivista della Unione Radioamatori Italiani