Brazilian YL Receives Award
Luciana De Oliveira Blaskiewiski, "Lucy",PU3LYB  received the diploma from the dx century club of ARRL, after having confirmed 156 countries, achievement achieved in the mixed category, with 56 countries in phone, 25 In Digital mode and 139 on CW.
Lucy has become part of a select group of dx's as the first female amateur in the state of Rio Grande do Sul.
Lucy, whose initial call-sign  was ZZ3LY lives in Viamão, a small town near Porto Alegre.
Currently active in the 6 Meters Band (she loves 50 Mhz) on SSB AND CW,
You can also find her in the low bands, especially in 40 meters on cw and digital modes.
Thes station consists of IC-756 pro and IC-7100, boom-set plus by Heil (Hc4 E-), 40-Meter Antennas,  1-element loop and 6 elements for 50 Mhz  and Dipole for the 10 meters band.   (PY2ZJ CW HAM BLOG 3 January, 2020) 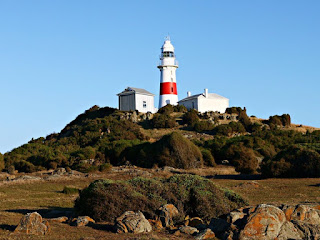 Low Head Lighthouse - Tasmania   pic above
Anne, VK7BYL, and Shirl, VK7HSC, were active for the International Lighthouse and Lightship Weekend. August 2019.
Here is Anne’s report  “A heckling of hams” or “An astonishment of amateurs” Both could describe the gathering at Low Head in Tasmania for the ILLW weekend which this year coincided with the RD contest.
Shirley and I set out on Saturday morning for what was for both of us the unknown (as neither of us had been out for some years); a weekend at Low Head in the company of several others. We were promised a warm house, good food and great company and all we had to do was to take a dessert or two and ourselves.
Despite a forecast of snow and cold both days turned out to be out of the box, particularly Saturday, with blue skies, very little wind, several whale sightings and penguins at the gate. The radio gear was in a sun-room at the rear of the house and gear supplied by Ross VK7ALH was everywhere. Mostly we used a Kenwood 950 or something similar. The antenna setup was impressive with a heavy-duty H-frame mast in 3 extendable sections mounted permanently on a trailer and cranked up to carry a trap dipole from 160 through to I don’t know what. I think I need to get back to study and wake up the brain which has suffered a bit through illness.
Conditions I thought were disappointing with not many contacts on either RD or ILLW. The bands seemed very quiet and the furthest DX was West Australia which we also worked on VK7RAA on our way home anyway.
However the weekend was great fun, the scallop pies were out of this world with a full feed of Tassie scallops in each one. The company was great. The tall tales bouncing around the room had to be heard to be believed. The weather held up and only started breaking up late Sunday. All round it was a great weekend.
Present were Geoffrey VK7GW and xyl Jenny, Leigh VK7FLAR, Roger VK2RO, Gavin VK7VTX, Andrew VK7DW, Roscoe VK7ALH, Peter VK7KPC and xyl Kay visited and a couple of tourists dropped in.
On Sunday at noon volunteers fired up the foghorn and for 15 minutes at regular intervals we were deafened and entertained by a very loud noise. All radio was abandoned and conversation limited to the gaps as foghorn blasts, which can be heard for 20 miles or so out to sea, overrode everything. Sound in decibels? LOUD! 33 Anne VK7BYL
(from: alara.org.au ▪ ALARA Newsletter Issue 171 OCTOBER 2019)

Low Head Lighthouse    AU0048     Location Lat: 41° 03.3355' S Long: 146° 47.3652' E
A signal station was set up at Low Head in 1805.  The  first light was known as the ‘Georgetown Station’. The light-station, established in 1833, about 7 km (4.3 mi) north of George Town on the east side of the mouth of the Tamar River. It was the third lighthouse to be constructed in Australia, and it is also Australia's oldest continuously used pilot station. This light is now unmanned and automated.
Tasmania's only foghorn, installed in April 1929,  was electrified in 1940 and discontinued in 1973 due to improvements in navigational equipment. Today, the foghorn at Low Head Lighthouse is one of only two functioning Type G diaphones in the world, and it is sounded every Sunday at noon
In 1940, electricity replaced the old vaporized oil system and mantle, and the clockwork rotating mechanism was replaced by an electric motor.          https://lighthouses.org.au/tas/low-head-lighthouse/

Ja-No-Well-Fine
From the above report you will realize that the weather in August in the Southern hemisphere is not pleasant! It may go some way to explaining why the South American Lighthouse Weekend in February, the southern summer, has become so popular.
Started in 2009, it is important to recognize the effort and commitment of the expeditionaries who make the event possible.
But the key to success has been  the combination of the activators and the supporters (Hunters) of the lighthouses, both parties are essential.
Several YLs  from Argentina, Brazil, Chile, Mexico and Uruguay have confirmed their participation in the 2020 event.
Thank you to Carlos Almirón (LU7DSY) of Radio Club Grupo DX Bahía Blanca, for updates, information and his on going commitment to this event.        (Editor: Heather ZS5YH)

South Americas Lighthouse weekend "Fin de Semana de los Faros Americanos"
12th Annual Activation -  14-16 Feb , 2020
Argentina
BALIZA GORRO FRIGIO ARG-091 Beacon  Phrygian Cap (42 ° 35 'S - 064 ° 18' W)
Laura Fanelli LU1WL  who has participated  in all the activation's to date, will be accompanied among others by Rita Mabel García LU7DAC.
The light is a 5m high iron tower active since 1944 whose lamp has a range of 6.2 nautical miles. It is located a few meters from the New Gulf in the vicinity of Puerto Pirámides, access by gravel road. 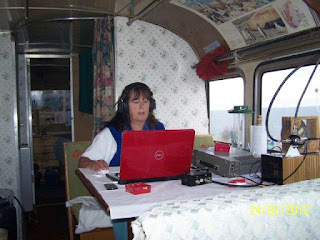 FARO CABO BLANCO  ARG-001     Lighthouse Cape White  (47 12 S- 066 44' W)
Included in the team from Radio Club Commodoro Rivadavia, will be Anabel Alvarez LU2WWA and Gabriela Sinski LU9WZM.  Using the Club call-sign  LU2WA  they will be active on all bands and modes.
The Lighthouse Cape Blanco, is located at the southern end of the Gulf San Jorge, on a rocky promontory about 90 km north of Puerto Desired, Santa Cruz, Patagonia.
Slightly higher than 40 meters, to reach the lighthouse you have to climb a spiral staircase of 100  stone steps.
An important reserve of marine birds and  sea lions.

CAPE SAN PABLO BEAM,  ARG-074, Cape San Pablo Arg.
The Radio Club Ushuaia will have a double activation from Tierra del Fuego by two of its members, Miriam Cami LU2XWL and Walter Heredia,LU1XP
Miriam Cami LU2XWL, (wife of Walter), will activate the beacon Cabo San Pablo, Arg-074, using her own callsign. This beacon is situated a few meters from the original, now historic lighthouse.
CABO SAN PABLO LIGHTHOUSE (historic), ARG-031  (54 ° 17.0 'S - 066 ° 41.0´ W)
Walter Heredia LU1XP, will activate using his personal callsign  The lighthouse has been inactive since the earthquake of December 17, 1949, After more than 70 years, it remains in the same position, located, about 60 km. southeast of Río Grande, and 116 km. from the city of Ushuaia, Tierra del Fuego.
In the photo you can see in the foreground the historic lighthouse and further back the beacon of the same name. 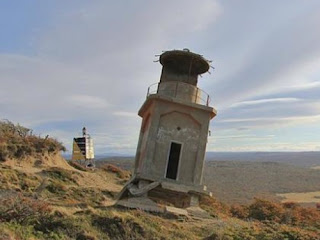 FARO RIO NEGRO ARG-012    Lighthouse Black River       (41º 3.0´ S - 062º 48.0´ W)
Marina Diaz LU1VYL, with team members  Alex Rocca LU8VCC and Jorge Gandini LU1YJG,
using  LT5V  will activate  SSB, CW and digital modes, with 2 simultaneous stations.
This is the oldest lighthouse in Argentina and the first one built on the coast of Patagonia; located on the west side of the mouth of the Río Negro,  near Viedma, capital of the Rìo Negro province.

FARO QUERANDI  ARG 007 Lighthouse  Querandi  ( 37 ° 27 ′ 52 ″ S, 57 ° 06 ′ 51 ″ W)
Alejandrfa Calla LU8DN, joins the team of the Radio Club Pinamar,
Erected 1922  it is an active lighthouse located 30 km from the town of Villa Gesell, in the Province of Buenos Aires. The area around the lighthouse was set aside in 1996 as the Reserva Dunícola Faro Querandí. Located atop a forested dune complex about 15 km (10 mi) south of the Mar Azul beach resort; accessible by 4WD vehicles on the beach.  The light station is staffed.

Chile
FARO PUNTA CALDERA CHI-065  Lighthouse Pt Caldera (crater) (27 03.1'S - 070 51.1 ' W)
Maritza Fredes CE1RFI and Delcy Maldonado CE1RFN, from  the Chilean YL Radioamateur Group, will participate using their own call-signs.
It is located on a promontory about 5 km NW  of Caldera city, in the Atacama Region of northern Chile. It is the only lighthouse built in wood in Chile and was restored in 1987. 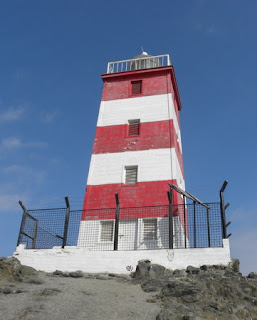 Mexico
FARO ISLA PEREZ MEX-085   Lighthouse Island Perez (22 24.0 'N - 089 º 42.' W) iota na-153
Paty Mohedano XE1SPM,  will be team leader of the expedition to Perez Island in the Gulf of Mexico. For a week, 11-17 February, a team of the radio club Puebla Dx with the prefix 6F3a will activate the dx-pedition to the Island Perez IOTA NA-153, which also includes the Lighthouse Island Perez Mex-085.  Since 2015 it will be the 6th consecutive participation of the radio club Puebla Dx in this event. They will also be active in the CW ARL Contest as  6F3a.
Patricia "Patty" Mohedano XE1SPM  will accompany Ismael Martínez Vizcarra XE1LAY, King David Ramirez XE1SRD  and Ricardo Orozco Campos XE1SY (qsl manager).
They are planning to work all the bands (6,10,12,15,17,20,40 and 80 meters, as well as satellite) with 3 simultaneous stations, powered by portable generators and deep cycle batteries. They will have three teams of 100 watts of output power, two antennas antennas of 6 Bands, a rotary dipole for the bands of 12 and 17 meters, as well as 2 dipoles, one for 40 meters and one more for 80 meters.
Pérez Island is a Mexican island in the Gulf of Mexico, facing the north coast of the Yucatan Peninsula and belongs to the Arrecife Alacranes National Park, being the main island of the reef. It is only 1 km long by 500 meters wide, with very little vegetation, inhospitable for human life, it is an important refuge of maritime fauna. 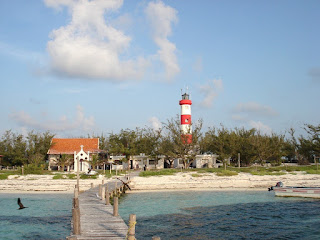 Uruguay
FARO CERRO DE MONTEVIDEO  ARLHS URU-009
Lighthouse Montevideo  (34º 53,18'S - 056º 14.34 ' W). (GRID SQUARE: GF15UC)
Margarita Gentile Berberich CX1AZ and Alicia Gomez CX4DW will accompany the team of the Uruguayan Radio Club, event callsign  CW1C
Lighthouse is located on the top of a hill in the Fortress of Montevideo, Uruguay. This is the oldest lighthouse in that country, built by Spain before Uruguay became independent. It was inaugurated and illuminated for the first time on April 4, 1802. After restoration, the fortress was reopened in 1939 as the military museum Fortaleza General Artigas. 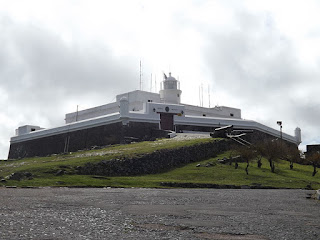