Our new name above in recognition of SAWRC (South African Women's Radio Club)
Founded 1952 which had its own magazine, "YL Beam" 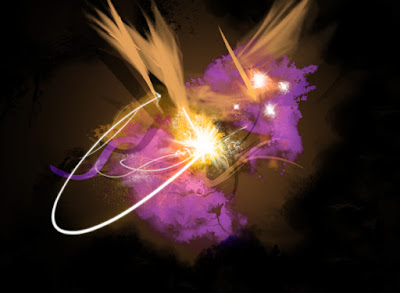 SPRITES AND TROLLS AT THE EDGE OF SPACE:
We all know what comes out of the bottom of thunderclouds: lightning. But rarely do we see what comes out of the top. On August 10th, 2015, astronauts on-board the International Space Station observed red sprites dancing atop a cluster of storms in Mexico. Photos show their red forms reaching all the way from the thunder-storm below to a layer of green air-glow some 100 km above Earth's surface. This means sprites touch the edge of space, alongside auroras, meteors and noctilucent clouds. They are a true space weather phenomenon. A few minutes after the astronauts saw the sprites, they spotted a related creature--a "Troll." It jumped up to the left of the sprites. Sprites can actually pull Earth's ionosphere down toward the thunderstorm. When the gap shrinks and the local electric field intensifies, Trolls appear.

Editor: After hearing that the ISS celebrates New Year's Eve 16 Times (last issue #29) its a good thing the above sighting did not occur at this time of year! (hi-hi)
We hope that you celebrated 2016 in a spectacular fashion and wish everyone lots of “Pixie Dust” (aka propagation) for the New Year.

Local is Lekker
ZS3LAC Dr. Lisa Crause 19/12/2015
I'm an astronomer in the Instrumentation group at the South African Astronomical Observatory (SAAO) in Cape Town, but spend lots of time up in Sutherland - since that's where much of the cool stuff happens! I'm incredibly lucky to work with absolutely amazing people while getting to do all kinds of interesting things :) My brother took the attached pic when he visited up here earlier in the year, while I was working on something inside the payload of the Southern African Large Telescope (SALT).
The Observatory's in a beautiful, peaceful place & there's an endless amount of work to be done looking after the various telescopes & instruments. Both on SALT & on the SAAO's smaller telescopes, like the 74-inch (1.9-m) which we've recently finished building a new spectrograph for. Check out http://saaospup.blogspot.co.za/ for more on the building & commissioning of this latest SAAO instrument, now dubbed SpUpNIC.
There's also a whole series of posts on the SALT Astronomy blog, starting in early September 2013 describing the installation & commissioning of SALT's latest spectrograph, the HRS (High Resolution Spectrograph).

See
http://saltastro.blogspot.co.za/2013/09/welcome-hrs-airfreight-including.html
& work your way up through the posts to see it going together, then there are a couple more about the HRS in October & November 2013.
A few years ago I was involved in a project to fix SALT's spherical aberration corrector & kept my first blog about that adventure:
http://saltiqmission.blogspot.co.za/2009/04/time-to-fix-southern-african-large.html.
If you ever find yourself passing through in the Karoo, you should aim to pop by the Obs & come see what the place is about.
(Ed.: There are 9 YL's in Div 3. N Cape; 3 at Sutherland – rare DX!) 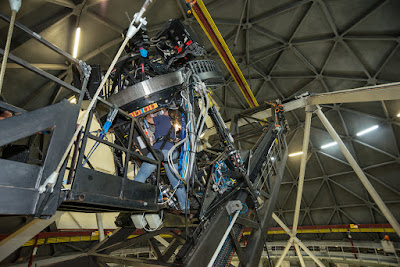 Sutherland and SAAO
Since the early 1970s, the major telescopes of the SAAO (South African Astronomical Observatory) have operated on a hilltop near the Karoo village of Sutherland, about 370 km inland. from Cape Town and 1800 metres above sea level. GPS: [20°48’38.5″E 32°22’46″S]
This small village is in the Northern Cape, a semi-desert region, with vast stretches of arid bushland between towns. This emptiness has made the province a major hub for astronomical observations – there's little artificial light, pollution, or radio waves to interfere with optical and radio astronomy.
In addition to its remoteness, the Northern Cape has a low topography that is suited to radio astronomy, with mountains providing extra shielding against radio waves from distant metropolitan areas. The main gate and Visitor Centre is about 14 km from Sutherland.
In winter the narrow, tarred road to Sutherland (R354) can have a layer of snow or ice on it. Drive carefully as there is wildlife in the area including tortoise, baboon, snakes, bat eared foxes, rabbits, antelope, black eagles and lots of flowers in spring.

The Southern African Large Telescope (SALT) is the largest single optical telescope in the southern hemisphere and among the largest in the world. It has a hexagonal primary mirror array 11 metres across, comprising 91 individual 1m hexagonal mirrors, with a light-gathering surface of 77.6 square metres. The last of the 91 smaller mirrored hexagon segments was put in place in May 2005. First light with the full mirror was declared on 1 September 2005. 2006 - 2009 was a period of commissioning and performance verification. Since September 2011, it has begun realising its potential as Africa’s Giant Eye on the Universe.
The southern hemisphere is the perfect place for astronomy because it sees more of the sky than the northern hemisphere. The centre holds Open Nights, which include a talk, a site tour and weather permitting, star gazing. Entrance is free.

ZS3VIC- Vic Moore: Sutherland Repeater. - With the grateful assistance of HAMNET Western Cape we have recently commissioned a 2m Repeater in Sutherland. RX 145.600 Tone 88.5 Hz which would not be possible without the gracious assistance of ATNS South Africa (Air Traffic Navigation Systems) for hosting the repeater. It is situated at the ATNS radar site approximately 1850 metres above sea level.
We now have 2m coverage over an extensive area not previously covered by Cellular or any other communication method. This has greatly enhanced the safety of travellers in the area. (licensed amateurs only)
It will also be of great importance should disaster communications in the area be required
We now have an APRS Igate operating at 1810 m asl - ZS3OBS-10. 32°22.59' S 20°48.65' E

SOS Radio Week (RNLI) : 23-31, Jan. 2016 - Nine days of fun, non-competitive, operating. A fund raising event by Radio Amateurs in aid of the Royal National Lifeboat Institution (RNLI)
The event takes place at the end of January to coincide with the RNLI’s own SOS fund raising day. Run since 2009, the event is open to Amateur Radio operators in the United Kingdom, Ireland, Guernsey, Jersey and the Isle of Man. http://www.sosradioweek.org.uk/

YLs wake a quiet Essex repeater
GB3DA, the repeater in Danbury near Chelmsford is one of repeaters looked after by the Essex Repeater Group (UK). Of an evening when no net is scheduled its pretty quiet. On the 27th of August (2015), the repeater quickly livened up after Kelly, M6KFA started an impromptu net.
Kelly presents an online technology radio show and during a brief pause in recording, put out a call on the repeater. Thanks to the help of a mention on Facebook and Twitter, an impromptu net of 12 was under way. Kelly was joined on-air by fellow YL Dorothy M0LMR, prompting talk of a YL net. There’s much discussion taking place about how to get more activity on 2m, and now we know what the answer may be - encourage our YLs to take to the air!
http://www.southgatearc.org/news/2015/august/yls_
>>>>>>>>>>>>>>>>>>>>
http://pi4ylc.nl/nl/2015/12/12/dutch-yls

Further Afield
YL Solo Sailor
Heather ZS6YE wrote to ZS1SAM: Don't always remember the call-sign but never forget a voice - so when I heard Susanne N1QFE check in with Sam on the S African Maritime Net, Monday 14/12/2015, I checked my address book. In 2003 after several QSO's we met Susanne N1QFE and OM Tony aboard their yacht “So Long” on their arrival in Hout Bay, W Cape.
ZS1SAM replied: I’ve been speaking with Susanne for the past few weeks; she is way down south on her way to Australia. Her last port was the Canary’s, so it’s been a long passage. She is single handed; on a new boat, S/v NEHAJ.
My beam is pointed to the SE of Cape Town, my sked with her is at 06:20 UTC - 14,316 KHz
I have alerted the Australians and NZ that Susanne is on her way to them, gave them my frequency and time, and this morning VK6NDE – Ted – came onto frequency plus a whole bunch of other stations and they made contact with Susanne. I am really pleased about this; at least she will have company should we lose contact.

Keep a listening watch and track her on:
http://www.yachttrack.org/yacht_info/getShipInfo.php?MyCallSign=N1QFE